How to Feel Better After Quitting Alcohol 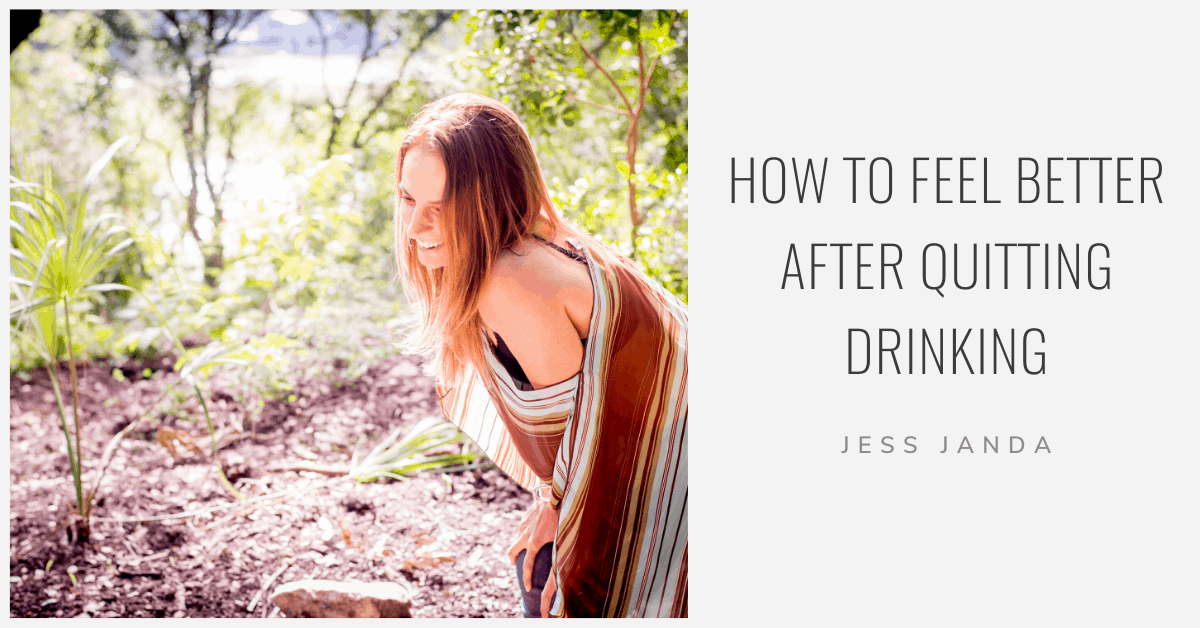 In this episode I will teach you how to feel better after quitting alcohol.

Alcohol had officially gotten in the way of my ability to show up fully for the things that mattered most. My family, my career, my friendships, my ability to be the change maker I know I was put on this earth to be.

But when I finally got sober 5 1/2 years ago I was confronted with a Pandora's box of health symptoms.

I started to experience things like memory loss, brain fog, fatigue, insomnia, anxiety and depression and no one had any tangible answers for me.

Things that are made me question whether or not sobriety is worth it.

And then … after 3 years of going down never ending rabbit holes and endless Google searches I finally got to the root cause of the issue.

HINT: The key to feeling better after quitting alcohol begins in the 2nd BRAIN, the GUT!

And now I want to show you exactly what I did to feel better!

In this episode I will teach you how to:

And how doing so will finally get your brain and your body firing on all cylinders again.

HINT: The key to restoring your health after alcohol begins by repairing your 2nd Brain, the GUT!

My dependency to alcohol started in intermediate school. It started as a way to fit in and be around other humans comfortably in my own skin (introvert here).

Over the years “checking out” (drinking) had become my only tool. My only tool to deal with stress and living a life that was deeply incongruent to what I felt deep down was my true purpose.

I felt stuck in an unfulfilling career that I had gone to college for 7 years for. I was a technology architect designing trading systems for Wall Street. And a well-paid one to boot not to mention and I had just finished paying off my student loans. Hooray, technically I was free, but deep down I felt unhappy and discontent despite the outward appearance of success.

But when the market crashed in 2008, I watched as people I knew personally lose their homes and retirement savings as a result of the crash. I felt, in some small way, morally responsible. Not that I single handedly brought down the market, but I was definitely part of the problem. I certainly wasn’t adding “value” to humanity as a whole. That weighed heavily on me.

My nights consisted of “checking out” on the back porch ruminating on the role I was playing to create a society that I didn’t want to be part of. The pressure was unbearable.

I thought that quitting my job would solve all of my unhappiness problems but ironically it didn’t.

I would continue drinking for another 5 years into my career as an entrepreneur until surrendering for help. That day was March 18th 2014.

Again, I thought quitting drinking would solve all of my unhappiness problems but it actually made things worse.

Symptoms like memory loss, brain fog, fatigue, insomnia, anxiety and depression. Symptoms that made me question, to my core, whether or not sobriety was “worth it.”

The rooms of recovery were filled with sugary sweets, diet sodas and energy drinks. The judgy-mcjudgy in me snickered at this. Especially as I watched the prominent surgeon in the front of the room with his diet Dr. Pepper in hand speak to his own declining health on a regular basis. Or when I heard that people had gotten sober only to go on an anti-depressant, an anti-anxiety or a sleep medication. Trading one more socially accepted drug for another.

How was this the “go to solution” and why was no one talking about how to repair your brain and your body naturally after quitting from alcohol?

It was an oxymoron and it’s what led me to a new era of science and in my health coaching, focusing on nutritional psychology and the gut-brain connection.

For that I am grateful. I now feel like everything I went through was preparing me for this moment. So my journey could be used as a vehicle to raise awareness and positively impact change. Turns out happiness is an inside job.

We are now learning that the gut microbiome, which consists of over 100 trillion bacteria, plays a vital role in mental and overall health and that chronic use of drugs and alcohol can affect this delicate balance manifesting in all sorts of negative health symptoms.

Whether this pertains to you or someone you love, I am here to tell you there is hope and that what I am about to share with you in this episode is definitely a missing link.

In today's episode below, I interview one of the world’s leading experts on the gut microbiome, the gut brain connection and cortisol/stress response, Dr. Shawn Talbott as we explore the reasons why people who quit using drugs and alcohol often times end up in the “dip zone”. The “dip zone” of never feeling good coupled with crippling anxiety which often times leads to relapse.

CLICK HERE TO DOWNLOAD MY 5 HACKS TO ZAP BRAIN FOG AND RECHARGE YOUR MENTAL CLARITY AND STAMINA SO YOU CAN OPERATE “IN THE ZONE” ALL DAY, EVERY DAY!

So you're sober and feel like crap, what exactly is causing you to feel this way? To determine that out we have to look at the cascade of signaling stemming from your gut microbiome.

It feels like something is off in your brain but the signals that your brain is receiving and interpreting are actually coming from someplace else in the body. Some of the signals could be coming from your out of balance gut bacteria (dysbiosis). Others could be stemming from the permeability in your gut tissue & lining (leaky gut). Chronic drug and alcohol use can lead to both of these conditions. The first signs of dysbiosis and leaky gut are digestive issues, fatigue, brain fog, increased sugar and processed food cravings, anxiety and depression.  Have you ever noticed how healthy food never sounds good after a night of drinking or using? That's literally because the high levels of bad gut bacteria are signaling from your gut to your brain that the chick-fil-a drive through sounds much better than the green juice.

​Drugs and alcohol cause inflammation in the gut, making it difficult for your body to absorb nutrients. The signals produced by inflammation could also be triggering the cascade of negative health symptoms throughout your body.

Did you know that 60-90% of your neurotransmitters are produced in your gut? In a healthy, diverse and balanced gut microbiome that is. And then communicated 90% one way from your gut to your brain?

These are the neurotransmitters responsible for:

When I finally stopped to understand this I truly felt like it was the missing link I was searching for within my own recovery/health puzzle. When your gut is out of balance the production and communication of neurotransmitters is greatly impaired. This imbalance could be one of the reasons why you started to self-medicate with drugs and alcohol to begin with. Thus continuing the vicious cycle of not feeling like your brain and body is firing on all cylinders potentially leading to relapse.

So what can you do about it once you get sober and feel like crap? Improve the signaling across your entire gut-brain axis. I always recommend that my clients follow my 5R Framework for Gut-Brain Connection Restoration:

Do a targeted intervention to get the bad gut bacteria to die off by following a grain/sugar free, vegan eating plan for 3 days.

Help the good gut bacteria flourish by supplementing with the targeted probiotic strains (good bacteria) that have been shown to positively impact mental wellness (e.g. depression, anxiety and stress/cortisol response). It's imperative that these targeted probiotic strains be matched with their preferred food source, commonly referred to as prebiotics, to encourage the growth of bacteria once they are there. Phytobiotics are also essential to include in your diet to protect the good bacteria once it’s there.

The production of your "feel good" neurotransmitters in your gut and improve signaling between the gut and brain by giving your body the key nutrients needed to repair gut lining that can often be in short supply in a compromised gut. These nutrients include zinc, alpha and beta glucans, antioxidants (e.g. vitamins A, C, and E), fish oil, and the amino acid glutamine.

It is important to pay attention to lifestyle choices. Sleep, exercise, and stress can all affect the GI tract. Balancing those activities is important to an optimal digestive tract. Make sleep a priority. Start to incorporate a short 5-10 meditation in the morning right when you get up and before you touch technology. New to meditation? Start HERE with Tara Brach’s guided meditations for beginners.

With every Episode of Jess Janda TV, I like to empower you with a POWERFUL FREE resource that you can download and incorporate into your life right away.

This week I've put together a resource called My 5 Top Hacks to Zap Brain Fog and Recharge Your Mental Clarity and Stamina so You Can Operated "IN THE ZONE" All Day, Every Day.

In it, I outline my 5R Framework for Gut-Brain Connection Restoration to help get your brain and body firing on all cylinders again after giving up drugs or alcohol so you get back to living your purpose with increased clarity and sustained energy.

I've coupled it with detailed dietary and products recommendations which takes the guesswork out it every step of they way - no more countless hours spent on Google, elimination diets or wandering aimlessly through the supplement isles. It's like having an EASY BUTTON. Click the link below to download it!

Join the Gut-Brain Connection Conversation below ...

About the Author: Jessica Janda

Jess Janda is an Addiction Overcomer, Mental Wellness Educator and a Health Coach specializing in the Gut-Brain Connection. She helps high performers and go getters who strive to live life outside of the box create the mental resilience and clarity needed to be the change maker they were put on this earth to be. Jess is super passionate about natural mental wellness modalities, meditation, plant medicine and most of all, helping to break the silence and end the stigma around mental wellness issues here and around the world. Jess is an avid surfer, foodie, minimalist, lover of sunsets, the planet & all of earth's creatures.

Enter Your Info Below To Get Jess's Top 5 Hacks To Zap Brain Fog And Recharge Your Mental Clarity And Stamina So You Can Operate
"IN THE ZONE" All Day, Everyday